Travel Stories and Photographs by John. 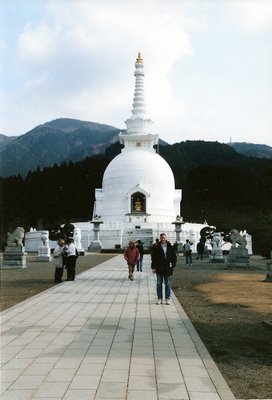 A Buddhist Temple outside of Tokyo.

My first trip to Japan was a business trip that included stops in Amsterdam and Tokyo. At the time I was working for a big four accounting firm. The client was a software company located in San Francisco California’s Silicon Valley. My responsibility was to go to the Europe and Asia subsidiaries to look at controls they had in place to ensure that the company was in fact receiving all the royalties they were due for licenses issued.

After leaving Amsterdam, I flew to Hong Kong by flying over Russia and China, a twelve hour flight. There was a short layover in Hong Kong and then I flew for another eight hours to Tokyo. Arriving in Tokyo's Narita International Airport was a much greater language challenge than Amsterdam. The customs information to be completed was thankfully in both Japanese and English. However, due to security concerns and Japanese immigration procedures, customs took about an hour to clear.

After going through customs and picking up my luggage, I quickly found an ATM and picked up some Yen. Then using a tour book that explained about the JR (Japan Railway) Narita Express Train to downtown Tokyo and a helpful person at the travelers’ information desk; I was able to navigate the airport, purchase a train ticket at a ticket office in the Narita terminal, and then locate the correct train to the Tokyo station.

The trip to downtown was about an hour on the train. Sitting on the train I couldn’t understand the announcements, but there was a scrolling English language sign that indicated the various train stations. A Japanese mother with a small boy sat across from me on the train and even though I didn’t speak any Japanese, the boy kept laughing and talking to me. I just smiled and said hello. My stop on the JR Express was the Tokyo station where I was able to grab a taxi to my hotel the New Otani Hotel. When I entered the taxi I just said "New Otani Hotel" and the driver said "Hai" (Yes) and we were off. Evidently, even though he didn’t speak a word of English, he knew my hotel or at least I hoped he did. One word of warning about taxis in Tokyo is to be careful opening the door. The driver opens the passenger door automatically and if you reach to grab the door you can end up with a smashed hand. I only made that mistake once. 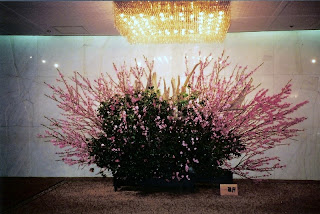 Flower Arrangement in the lobby of the New Otani Hotel

Arriving at the hotel, I was greeted by ladies in kimonos that bowed and welcomed me to the hotel. I checked in and was up to the room in a flash. I showered and waited for a call from Catherine, my wife. Catherine was flying in from San Francisco so we could spend the time together in Japan. Very shortly, I received the call from Catherine (thank God for cell phones). She had also grabbed a taxi and let me know she would soon be at the hotel. I ran downstairs and was very happy to have her with me. After some rest we went out on the town for dinner. 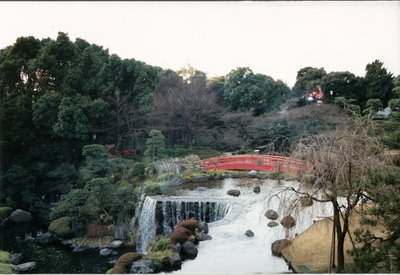 The gardens at the New Otani Hotel in Tokyo.

The accommodations at the Hotel New Otani included an American style breakfast and you could look out at the hotel's ten acre Japanese garden that has waterfalls and ponds. On a clear day, when you got off the elevator on the way to our room you could see the Tokyo skyline and off in the distance Mount Fujiyama. The main hotel in Tokyo opened in 1964, to coincide with the Tokyo Olympics and I remembered seeing the hotel in an old Cary Grant film made during the 1964 Olympics. 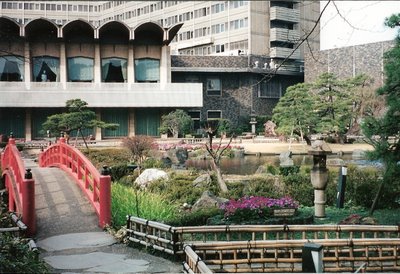 Another view of the gardens at the New Otani Hotel.

In the mornings, as I got ready for work, I watched Japanese Television that had a show of puppies playing with classical music in the background, nothing else no commentary, just the puppies playing for about half an hour. I don’t know why, but I found it to very peaceful and entertaining. Catherine was especially helpful on this trip because her mother was Japanese and Catherine had heard some spoken Japanese when she was growing up. As a result even though she doesn’t speak or read Japanese she could use a Japanese phase book and correctly pronounce the words. 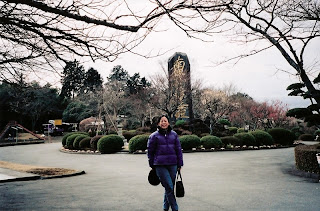 My wife Catherine flew from San Francisco, California to meet me in Tokyo, Japan

Travel Stories and Photographs by John.

I have traveled a great deal for work as well as for pleasure. I share stories of my travels and related pictures.

Other Blogs I Read: